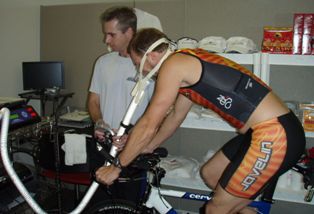 Sports technology, like any other, eventually trickles down to the masses. Amateur athletes now have access to some of the same testing and evaluation processes that the pros do. However, this testing can be complicated and confusing to the athlete. It must be administered by a coach or a professional who not only understands the science, but can explain how to apply it to an athletes training.

VO2 max testing is one example of this technology. There are now units available that can test an athletes VO2 for a fraction of the cost of clinical testing available a few years ago. Be careful though; not all means of testing are accurate and the testing protocol and administration are very important. Some machines attempt to extrapolate VO2 by various methods and these can be very inaccurate. An inaccurate test is of little value to an athlete. Be sure to ask what the variance is when compared to other clinical methods or metabolic cart testing that measures both CO2 and O2.

So what is this VO2 max everyone is talking about? Simply put, it tells you how big of an engine you have in your car. It can be expressed in two ways; absolute or by comparison. Your absolute VO2 is the volume of oxygen your body can take in and process. This is expressed in liters. A better value for comparison of athletes is in milliliters, per kilogram, per minute (ml/kg/min). This is the volume of oxygen the body uses per kilogram of body weight during one minute of exercise at a maximal level.  It would be roughly analogous to the power to weight ratio of a sports car. There are various factors that affect your max VO2, none the least of which is training, but it is largely a genetic number. Like a lot of performance characteristics, you can thank (or blame) your parents for your aerobic capacity. It is roughly only 20-30% trainable. Genetic propensities include large surface area of the lungs, stroke volume of the heart, capillary density, and airway diameter to name just a few.  A deconditioned individual or beginner will see the sharpest increase in VO2 max in their first season, while a seasoned veteran may have to work much harder to see any improvement. Max VO2 does degrade with age and usually starts to drop off after the age of 40, perhaps a bit later for women. Conditioned athletes usually range from 40 to 60 ml/kg/min. An athlete over 70 would be considered very exceptional. Lance Armstrong is said to have been tested in the high 80s but we will leave the reasons behind that for another day.

So an athlete with a large VO2 number (engine) always wins, right? Not necessarily. Although VO2 max is a major fitness substrate, it is certainly not the only one. Muscular strength / power, endurance, economy, sustainable power or speed at lactate threshold, and anaerobic repeatability are all very important factors depending on your sport. Take economy for instance. A runner that has very efficient form may be able to surpass an athlete with a higher VO2 simply because they do not use as much energy. This is especially apparent in the water where form is critical.  Put an exceptionally fit runner in the pool and they will be clobbered by intermediate swimmers.

And dont forget that weight (kg) is part of the ratio. You may have a very high absolute VO2 max (strictly the volume of oxygen you take in), but if you gain weight, your relative number decreases. This, of course, works in the opposite direction as well. Dropping body fat has a direct affect on your relative VO2 and power to weight ratio.

I have had athletes become discouraged by their test values. Unfortunately, it is what it is, but there are numerous examples of athletes who have competed at an elite level despite having good, but not exceptional, numbers. There are so many factors that affect performance, none the least of which is perseverance. An athlete who trains hard, consistently, and accurately can overcome a more genetically gifted competitor. For example; compare two hypothetical athletes, equal in every way, with the exception of relative VO2 values of 50 and 60. The athlete with the higher value can only sustain 75% of max VO2. The second athlete is very highly conditioned and can sustain 91% of max VO2. Based on these values alone, the less gifted athlete would be faster. My personal opinion is that max VO2 is of less importance on an amateur level where training consistency is often challenging. The pros get to sleep, eat, train, and repeat. For the rest of us, training often comes last after work and family responsibilities (or should). The athlete who can train the most consistently and with the most quality under these circumstances has the advantage. Life can sometimes be an endurance sport in itself.

So should you get tested? A VO2 test usually tells you a lot more than just your max VO2. Aerobic and anaerobic thresholds, calories burned at various intensities, and energy system development are also quantified. These numbers can be applied directly to your training. The test can also establish accurate heart rate training zones. The test usually entails breathing into a tube or mask while doing a graded exercise protocol. You do need to test the sport you are competing in. In other words, you would not perform a run test if you are a rower; the values are sport specific. Once completed the test administrator should sit down with you, explain your results, and answer your questions. They should also explain how to improve your VO2 max. Although it may only be partially trainable, a small improvement can yield big results.

If you are starting to compete, a VO2 test is a great way to establish your fitness baseline. You don't need to get retested frequently; maybe 1-2x per season. It is also important to note that even if your max VO2 does not improve much, the watts or speed you are putting out at max VO2 can improve, perhaps dramatically. Focus more on improvement of performance versus your number.

Matt Russ is a professional coach with over two decades of experience working with athletes up to the professional level. His athletes have achieved numerous regional, national, and international titles under his direction. Matt has achieved the highest level of licensing by both USA Triathlon and USA Cycling, and is a licensed USA Track and Field Coach. His accomplishments include being named "Team USA" Coach by USA Triathlon. Matt is Head Coach and owner of The Sport Factory, a USA Triathlon Certified Performance Center located in Roswell, Georgia. Visit www.sportfactory.com for more information or email him at coachmatt@sportfactory.com