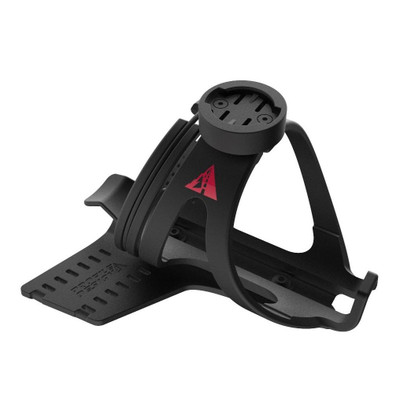 The HSF BTA offers improved positioning versatility, better retention and the ability to mount a Garmin computer above the bottle.

The HSF BTA takes a minimalist approach to providing the maximum versatility for a between the arms bottle mount. The low weight, high retention, setback mount point and integrated computer mount give everything you need and nothing you don’t.

The mount is offset so that the center point of the bottle bolts can sit well behind the attachment point. This allows the cage/bottle to be set further back on aerobars that would otherwise force the bottle forward to the point where it is inaccessible.

The mount has a slightly dropped ‘V’ shape to help center it between the extensions and reduce the risk of the bottle interfering with narrow armrest positions. The mount accommodates a greater range of extension widths than the previous models.

*System is Not Wahoo Element compatible - a aftermarket adapter is coming soon.